There has been much media coverage about the danger to life posed by the COVID-19 coronavirus pandemic. While it is clearly a serious threat, one should consider whether the best evidence supports the current degree of panic and hence government policy. Much of the concern resulted from a non-peer reviewed study published by the COVID-19 Response Team from Imperial College (Ferguson et al 2020[i]). In this article, I examine whether data from the Diamond Princess cruise ship – arguably the most useful data set available – support the fatality rate assumptions underlying the Imperial study. I find that it does not do so. The likely fatality rates for age groups from 60 upwards, which account for the vast bulk of projected deaths, appear to be much lower than those in the Ferguson et al. study.

Metrics for COVID-19’s fatality rate and their estimation

The fatality rate from infection (IFR), by age group, is a key parameter in determining how serious a threat the COVID-19 pandemic represents. Unfortunately, the IFR is difficult to determine. It is more practical to estimate the fatality rate for cases where the COVID-19 virus can be shown, by a standard test, to be present, whether or not there are any symptoms. This is referred to as the true case fatality rate (tCFR). The tCFR will overestimate the IFR, since a proportion of people who actually have been infected may show no viral presence when tested, either because they have already fought off and cleared an infection without any noticeable symptoms, or perhaps because they have pre-existing immunity. Nevertheless, where testing has been applied to a sample of people without regard to whether they show symptoms, the tCFR may provide a reasonable, albeit somewhat biased high, estimate of the IFR.

However, determining tCFR is not simple either, since in most cases infected people with no or mild symptoms will not be tested for COVID-19. Attempts have nevertheless been made to estimate tCFR by adjusting estimates of the CFR based on symptomatic cases only (sCFR), by adjusting for the non-random nature of testing, and also for the outcome of positive test result cases not being known for some time.

An alternative approach to estimating the tCFR, as a proxy for the IFR, is to use data from a large sample of people, all of whom were tested for the presence of the virus without regard to whether they showed any symptoms, with all who tested positive subsequently being isolated and the case outcome recorded. I use that approach. While the sample of expatriates evacuated from Wuhan is too small for this purpose,[iv] occupants of the Diamond Princess cruise ship do provide a suitable such sample.[v]  Moreover, the Diamond Princess sample has the advantage that it consists mainly of people from high income countries, and those requiring hospitalisation were treated in such countries.

The Diamond Princess sample may well represent the best available evidence regarding tCFR for older age groups, who are most at risk. Verity et al (2020) did analyse data from the Diamond Princess, but did not use sCFR or tCFR estimates from them for their main CFR and IFR estimates.[vi]

When Verity et al. was prepared, the final death toll was not known. The data available only ran to 5 March 2020, at which point 7 passengers had died. The authors therefore used a fitted probability distribution for the delay from testing positive to dying to estimate that those deaths would represent 56% of the eventual death toll. They accordingly therefore estimated the tCFR using a scaled figure of 12.5 deaths.

Accordingly, the Verity et al central estimate for the Diamond Princess death toll, of 12.5 eventual deaths, appears to be 20% too high. This necessarily means that the estimates of tCFR and sCFR they derived from it are too high by the same proportion.

The Diamond Princess dataset was published by the Japan National Institute of Infectious Diseases (NIID). I use the second version published on 21 February[vii], which gives detailed data for 619 confirmed cases, updating it for subsequent test results.[viii] Verity used the original 19 February version of NIID, which gave data for 531 confirmed cases, although they did update it for subsequent test results.

The entire set of passengers and crew, totalling 3711 individuals, was tested for COVID-19. Some 712 (19.2%) ultimately had positive test results, of whom (based on the NIID data for 619 of them) 51% were asymptomatic. The infection rate varied between 10.1% for ages under 30 years to 24.7% for ages 60+ years. The age-distribution was only known for cases included in the NIID data. Verity et al. assumed that the age distribution for the overall total of confirmed cases was the same as for the 531 NIID reported cases that they used. I do the same, but using the later NIID data, with 619 reported cases. On that basis, 203.6, 269.2 and 62.1 people in respectively the 60–69, 70–79 and 80+ key age groups had positive test results.

Recall that tCFR is the eventual death toll divided by the total numbers testing positive.

It appears that in about 30% of symptomatic cases the standard RT-PCR test for COVID-19 infection gives a negative result when the patient is in fact infected.[x] There is no evidence of any COVID-19 related deaths among Diamond Princess occupants who tested negative, which would be consistent with a lower viral load being associated with a lower probability both of a positive RT-PCR test result and of eventual death. The false-negative rate may be slightly lower for Diamond Princess occupants, a few of whom may have been retested or tested by a more reliable method where they had typical COVID-19 symptoms but an initially negative RT-PCR test result. However, it seems likely that the proportion of asymptomatic infected cases that are not detected by a RT-PCR test will be somewhat higher than the 30% estimated for symptomatic cases. We accordingly adjust all the tCFR ratios estimated from Diamond Princess case data down by 30% on account of false-negative test results.

The observed deaths of Diamond Princess occupants occurred over a 45 day period, during which a non-negligible percentage of old people would be expected to die from non-COVID-19 related causes. I have accordingly deducted from the adjusted tCFR ratios an allowance for non-COVID-19 deaths for 70+ age groups, based on UK age-stratified 2018 death rates,[xi] to arrive at estimates of deaths caused by COVID-19. There are arguments for the non-COVID death rates being either higher or lower than those for the UK population of the same age, but using those death statistics appears to be a reasonable first approximation.

The results of the foregoing analysis are set out in Table 1. The key finding is that the estimated tCFRs for Diamond Princess 60+ age groups, which must if anything overestimate their IFRs, are far lower than the corresponding IFR estimates used by Ferguson et al. in the study adopted by the UK government.[xii] Those age groups account for the vast bulk of projected deaths. For people aged 60–69, the Ferguson et al IFR estimate is 18.1 times as high as the best tCFR estimate based on Diamond Princess data, for the 70–79 age group it is 6.1 times as high, and for the 80+ age group it is 1.65 times as high.[xiii] 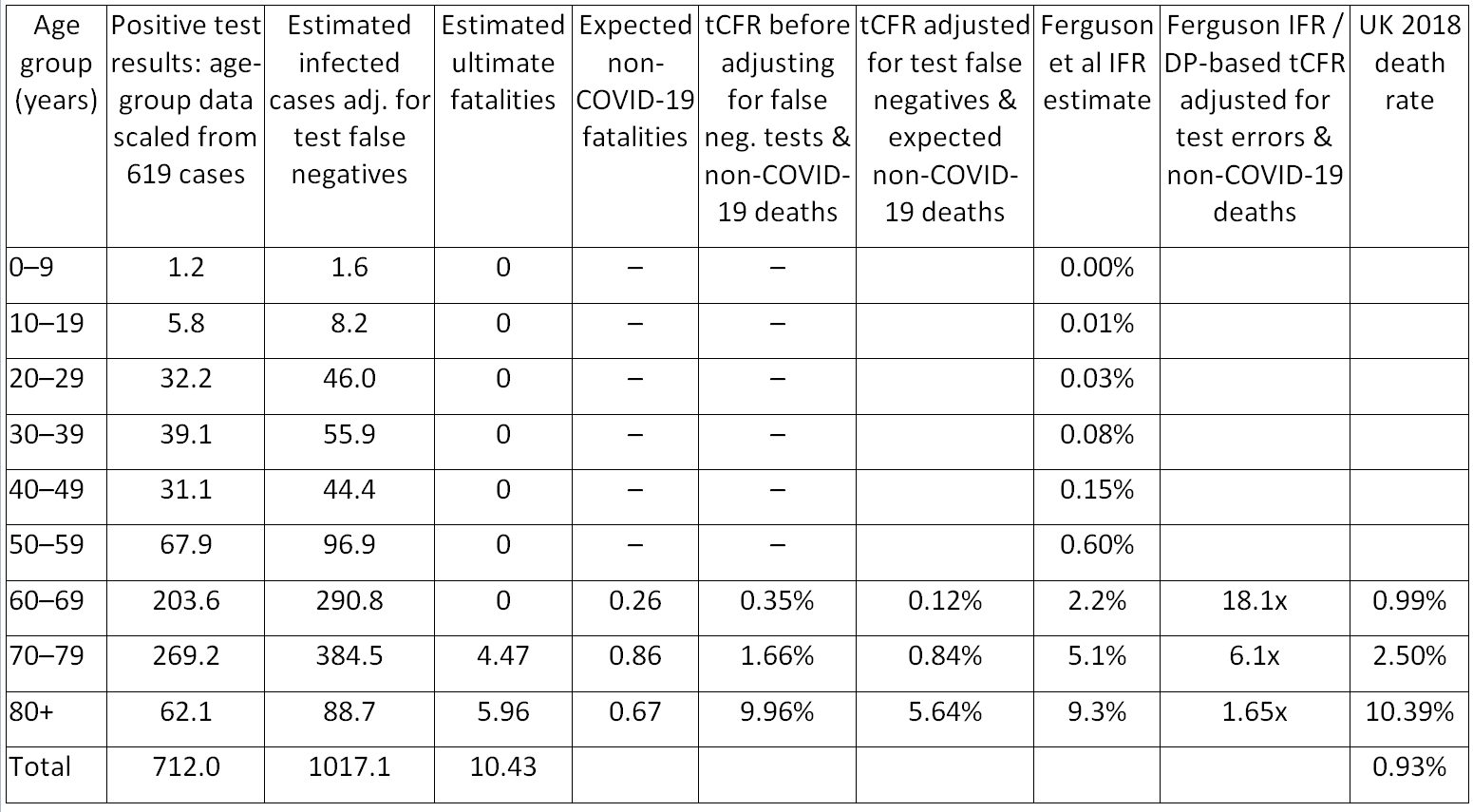 Note: An all-causes tCFR of 0.35% (and hence 0.72 notional ultimate fatalities) is assumed for age-group 60-69 despite there being no actual fatalities in that age group (see text). Expected non-COVID-19 fatalities are based on UK 2018 death rates by age group applied to the DP positive test cases, scaled by the 45 day period over which COVID-19 deaths were recorded and divided by the same 0.96 factor used to scale up the 10 actual deaths. DP= Diamond Princess.

Based on the Diamond Princess data, the COVID-19 fatality rates by age-group assumed by Ferguson et al. appear to be far too pessimistic for all 60+ age groups, where the vast bulk of fatalities are projected to occur. It is quite possible that they are also too pessimistic for younger age groups as well, but unfortunately the Diamond Princess data are uninformative about death rates below age 60.

It is notable that for all the 60+ age groups the projected excess death rates, based on Diamond Princess case data, caused by COVID-19 is substantially lower than the underlying non-COVID-19 annual death rate. Even assuming, very pessimistically, that there is no overlap between the two, and that the same proportion of each age group becomes infected, projected COVID-19 related deaths from an epidemic in which the vast bulk of the population became infected with COVID-19 are only 9% of expected annual non-COVID deaths for the 60–69 age group.[xiv] For the 70–79 age group, the proportion is 20%, and for the 80+ age group it is 26%. Relative to the expected non-COVID deaths over two years, the approximate period during which very onerous restrictions are projected to be in force in the UK, these COVID-19 excess death proportions would each be reduced by almost half. In practice, a high proportion of people killed by COVID-19 will have serious underlying health conditions, and would be much more likely than average to die from non-COVID-19 causes.

Note: this is an updated version of the original published on 25 March 2020, and takes into account  further information on deaths, and positive test results, that were reported (in Japanese) on 24 March 2020 by the Japanese Ministry of Health, Labor and Welfare,[xv] which had not been found in previous searches.

[ii] Ferguson et al. adjusted the Verity et al. IFR estimates “to account for a non-uniform attack rate”, without giving further information about the assumed attack rates. They appear to have increased the Verity et al. IFR estimates for all 60+ age groups by approximately 19%, while making little or no changes to those for younger age groups. It is unclear whether doing so was justified.

[iv] Their sample of evacuated expatriates is 689 people, of whom on 6 tested positive for COVID-19, none of whom died.

[v]Russell et al., “Estimating the infection and case fatality ratio for COVID-19 using age-adjusted data from the outbreak on the Diamond Princess cruise ship”, medRxiv preprint dated 9 March 2020, did use exclusively Diamond Princess data. However, the early data that they used was incomplete and their IFR (actually tCFR) estimates appear to be based on assuming 26 eventual deaths, and hence are far too high.

[vi] Verity et al. simply noted that that figures derived from the Diamond Princess data set were “consistent” with their main estimates, meaning that they fell within their very wide main estimate uncertainty ranges.

[viii] Using the same sources as given in Verity et al., for dates from 20 February on. Doing so yields a total of 704 positive test results, which I adjust to equal the cumulative total of 706 results stated in the final, 2 March 2020, update.

[ix] A simple estimate based on the binomial distribution suggests that the 97.5% upper uncertainty bound is approximately double this figure.

[xii] Moreover, I am unable to reproduce the Ferguson et al. estimate of 510,000 deaths in the ‘Do nothing’ case, based on their estimate of 81% of the population being infected and using their IFRs. Note that the Ferguson et al. IFR estimates assume that, as was the case for the infected Diamond Princess occupants, health systems have not been overwhelmed by COVID-19 cases.

[xiv] Based on the Ferguson et al. assumption that 81% of the population eventually becomes infected.