Originally a guest post on November 6, 2018 at Climate Etc.

Obviously doubtful claims reveal how unquestioning Nature, climate scientists and the MSM are.

On November 1st there was extensive coverage in the mainstream media[1] and online[2] of a paper just published in the prestigious journal Nature. The article,[3] by Laure Resplandy of Princeton University, Ralph Keeling of the Scripps Institute of Oceanography and eight other authors, used a novel method to estimate heat uptake by the ocean over the period 1991–2016 and came up with an atypically high value.[4] The press release [5] accompanying the Resplandy et al. paper was entitled “Earth’s oceans have absorbed 60 percent more heat per year than previously thought”,[6] and said that this suggested that Earth is more sensitive to fossil-fuel emissions than previously thought.

I was asked for my thoughts on the Resplandy paper as soon as it obtained media coverage. Most commentators appear to have been content to rely on what was said in the press release. However, being a scientist, I thought it appropriate to read the paper itself, and if possible look at its data, before forming a view.

The method used by Resplandy et al. was novel, and certainly worthy of publication. The authors start with observed changes in ‘atmospheric potential oxygen’ (ΔAPOOBS).[7] In their model, one component of this change (ΔAPOClimate) is due to warming of the oceans, and they derived an estimate of its value by calculating values for the other components.[8] A simple conversion factor then allows them to convert the trend in ΔAPOClimate into an estimate of ocean heat uptake (the trend in ocean heat content).

A quick bit of mental arithmetic indicated that a change of 23.2 between 1991 and 2016 represented an annual rate of approximately 0.9, well below their 1.16 value. As that seemed surprising, I extracted the annual ΔAPO best-estimate values and uncertainties from the paper’s Extended Data Table 4[10] and computed the 1991–2016 least squares linear fit trend in the ΔAPOClimate values. The trend was 0.88, not 1.16, per meg per year, implying an ocean heat uptake estimate of 10.1 ZJ per year,[11] well below the estimate in the paper of 13.3 ZJ per year.[12]

I derived the same best estimate trend when I allowed for uncertainty in each of the components of ΔAPOOBS, in the way that Resplandy et al.’s Methods description appears to indicate,[13] so my simple initial method of trend estimation does not explain the discrepancy.

Assuming I am right that Resplandy et al. have miscalculated the trend in ΔAPOClimate, and hence the trend in ocean heat content (OHC), implied by their data, the corrected OHC trend estimate for 1991–2016 (Figure 2: lower horizontal red line) is about average compared with the other estimates they showed, and below the average for 1993–2016. 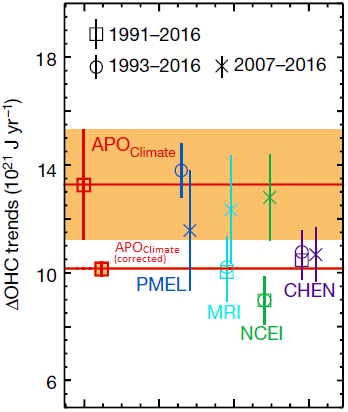 Figure 2. An adaptation of Figure 1b from Resplandy et al. with the corrected estimate for the APOClimate derived ΔOHC trend added (lower horizontal red line; no error bar is shown)

I wanted to make sure that I had not overlooked something in my calculations, so later on November 1st I emailed Laure Resplandy querying the ΔAPOClimate trend figure in her paper and asking for her to look into the difference in our trend estimates as a matter of urgency, explaining that in view of the media coverage of the paper I was contemplating web-publishing a comment on it within a matter of days. To date I have had no substantive response from her, despite subsequently sending a further email containing the key analysis sections from a draft of this article.

More importantly, it seems to me that uncertainty in the ΔAPOClimate trend, and hence in the ocean heat uptake estimate, is greatly underestimated in Resplandy et al., because of two aspects of the way that they have treated trend and scale uncertainties affecting ΔAPOOBS. First, they appear to have treated corrosion, leakage and desorption errors in ΔAPOOBS as fixed errors that have the same influence each year.[18] But these are annual trend errors, so their influence is proportional to the number of years elapsed since the 1991 base year.[19] Secondly, they appear to have treated both these trend errors and the scale systematic error in ΔAPOOBS as uncorrelated between years.[20] However, each year’s error from each of these sources is simply a multiple of a single random trend or scale systematic error, and is therefore perfectly correlated with the same type of error in all other years.

On a corrected basis, I calculate the ΔAPOClimate trend uncertainty as ± 0.56 per meg yr−1, more than three times as large as the ± 0.15 or ± 0.18 per meg yr−1 values in the paper.[21] This means that, while Resplandy et al.’s novel method of estimating ocean heat uptake is useful in providing an independent check on the reasonableness of estimates derived from in situ temperature measurements, the estimates their method provides are much more uncertain than in situ measurement-based estimates, and are consistent with all of them.

Resplandy et al. also make the bizarre claim that increasing the lower bound of the IPCC’s equilibrium climate sensitivity range from 1.5°C to 2.0°C would have the effect of “reducing  maximum allowable cumulative CO2 emissions by 25% to stay within the 2°C global warming target”. In fact, that cumulative carbon emissions budget is very largely determined by a combination of carbon-cycle characteristics and the transient climate response.[24] Observational estimates of the transient climate response are unaffected by the level of ocean heat uptake. Therefore, increasing the lower bound of the equilibrium climate sensitivity range would have little or no impact on the cumulative carbon emissions budget to stay within 2°C global warming.

The findings of the Resplandy et al paper were peer reviewed and published in the world’s premier scientific journal and were given wide coverage in the English-speaking media. Despite this, a quick review of the first page of the paper was sufficient to raise doubts as to the accuracy of its results. Just a few hours of analysis and calculations, based only on published information, was  sufficient to uncover apparently serious (but surely inadvertent) errors in the underlying calculations.

Moreover, even if the paper’s results had been correct, they would not have justified its findings regarding an increase to 2.0°C in the lower bound of the equilibrium climate sensitivity range and a 25% reduction in the carbon budget for 2°C global warming.

Because of the wide dissemination of the paper’s results, it is extremely important that these errors are acknowledged by the authors without delay and then corrected.

Of course, it is also very important that the media outlets that unquestioningly trumpeted the paper’s findings now correct the record too.

But perhaps that is too much to hope for.

[7]  ΔAPO is the change in ‘atmospheric potential oxygen’, the overall level of which has been observationally measured since 1991 (ΔAPOOBS). It is the sum of the atmospheric concentrations of O2 and of CO2 weighted respectively 1⤬ and 1.1⤬.

[8]  The authors break the observed change in ΔAPOOBS into four components, ΔAPOFF, ΔAPOCant, ΔAPOAtmD and ΔAPOClimate, deriving the last component (which is related to ocean warming) by deducting estimates of the other three components from ΔAPOOBS. ΔAPOFF is the decrease in APO caused by industrial processes (fossil-fuel burning and cement production). ΔAPOCant accounts for the oceanic uptake of excess anthropogenic atmospheric CO2. ΔAPOAtmD accounts for air–sea exchanges driven by ocean fertilization from anthropogenic aerosol deposition.

[9]  1 per meg literally means 1 part per million (1 ppm), however ‘per meg’ and ‘ppm’ are defined differently in relation to atmospheric concentrations and are not identical units.

[10] The same data is available in Excel format from a link on Nature’s website, as “Source Data Fig. 2“.

[12] I used ordinary least squares (OLS) regression with an intercept. That is the standard form of least squares regression for estimating a trend. Resplandy et al. show all APO variables as changes from a baseline of zero in 1991, but that is an arbitrary choice and would not justify forcing the regression fit to be zero in 1991 (by not using an intercept term). Doing so would not in any event raise the ΔAPOClimate estimated trend to the level given by Resplandy et al.

[13] I took a large number of sets of samples for each of the years 1991 to 2016 from the applicable error distributions of ΔAPOOBS, ΔAPOFF, ΔAPOCant, and ΔAPOAtmD given in Extended Data Table 4, and calculated all the corresponding sample values of ΔAPOClimate using equation (1). I then computed the ordinary least squares linear trend for each set of 1991–2016 sampled values of ΔAPOClimate, and calculated the mean and standard deviation of the trends.

[14] Laure Resplandy was responsible for directing the analysis of the datasets and models.

[15] This fact was spotted by Frank Bosse, with whom I discussed the apparent error in the Resplandy et al. ΔAPOClimate trend.

[16] All uncertainty values in the paper are ± 1 sigma (1 standard deviation). Errors are presumably assumed to be Normally distributed, as no other distributions are specified.

[17] The statement in their Methods that “ΔCant′ cannot be derived from observations and was estimated at 0.05 Pg C yr−1, equivalent to a trend of +0.2 per meg−1, using model simulations” is presumably also a typographical error. The correct value appears to be +0.12 per meg yr−1, as stated elsewhere in Methods and in Extended Data Table 3.

[18] On that basis , I can replicate the Extended Data Table 4 ΔAPOOBS uncertainty time series values within ±0.1. Note that all the values in that table, although given to two decimal places, appear to be rounded to one decimal place.

[19] The overall uncertainties given in Table 3 in Resplandy et al.’s source paper for its errors in ΔAPOOBS support my analysis.

[20] When using the Resplandy et al. Extended Data Table 4 ΔAPOClimate total uncertainty time series and assuming that each year’s errors are independent, despite the trend and scale systematic errors being their largest component, the estimated ΔAPOClimate uncertainty reduces to between ± 0.20 and ± 0.21 per meg yr−1. That is still slightly higher than the ± 0.15 and ± 0.18 per meg yr−1 values given in the paper. The reason for the small remaining difference is unclear.

[21] It seems likely that the same non-independence over time issue largely or wholly applies to errors in ΔAPOCant, ΔAPOAtmD and probably ΔAPOFF. If the errors in ΔAPOCant and ΔAPOAtmD (but not in ΔAPOFF) were also treated as perfectly correlated between years, the ΔAPOClimate trend uncertainty would be ± 0.60 per meg yr−1.