The four constraints that Caldwell assessed as credible

In Part 1 of this article the nature and validity of emergent constraints[i] on equilibrium climate sensitivity (ECS) in GCMs were discussed, drawing mainly on the analysis and assessment of 19 such constraints in Caldwell et al (2018; henceforth Caldwell),[ii] who concluded that only four of them were credible. All those four constraints favoured ECS in the upper half of the CMIP5 range (3.4–4.7°C). An extract of the rows of Table 1 of Part 1 detailing those four emergent constraints is given below.[iii]

Caldwell regarded a proposed emergent constraint as not credible if it lacks an identifiable physical mechanism; is not robust to change of model ensemble; or if its correlation with ECS is not due to its proposed physical mechanism. The credible constraints identified in Caldwell are all related to tropical/subtropical low clouds and all except Brient Shal are significantly correlated with each other.

Figure 1 shows the geographical distribution of the dominant sources of correlation for each of the emergent constraints assessed as credible. In each case the principal source is cloud feedback, dominantly shortwave (SW). The spatial pattern of correlation between the emergent constraint and ECS arising from cloud feedback is strikingly similar for all four constraints, despite their metrics being based on differing regions. Inter-model variation in forcing for a doubling of CO2 also has a non-negligible contribution for two of the four constraints. Other feedbacks account for that part of the total correlation not attributable to cloud feedback and 2⤬ CO2 forcing, and in aggregate are small except for Brient Shal.[iv] 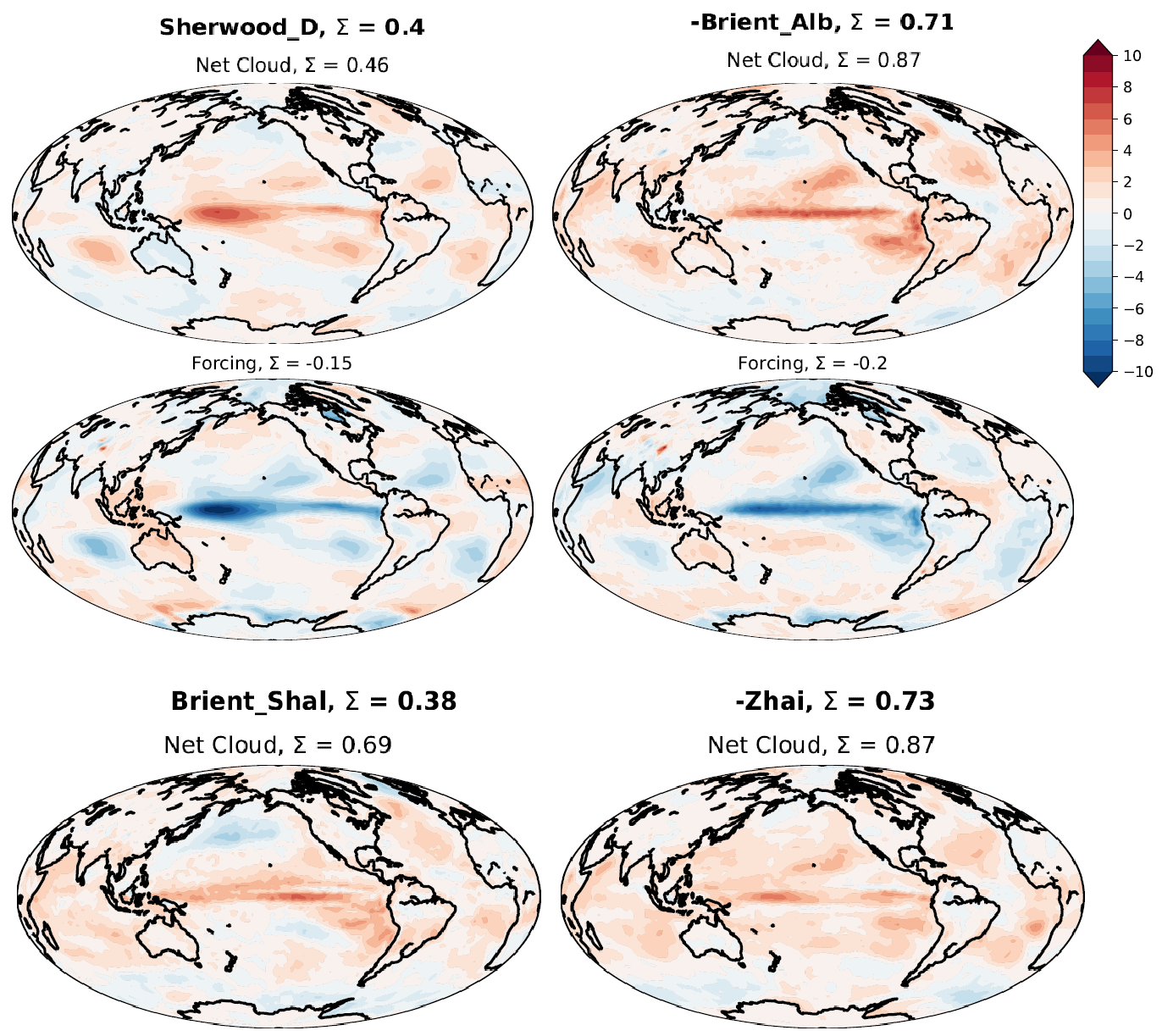 Figure 1 Geographical distribution of dominant sources of correlation with ECS of emergent constraints assessed as credible, per Figure 2 of the Caldwell supplementary material. The name of each constraint and its overall correlation Σ with ECS in GCMs are in bold. The correlations with ECS attributable to Net Cloud feedback and to Forcing are included in the title above each panel. Forcing is not shown where its absolute correlation is < 0.15.

.Of the studies proposing the four emergent constraints that pass Caldwell’s tests, Sherwood et al. has over four times as many citations (313) as the other three studies between them, so I will start by examining the validity of its emergent constraints. They are also discussed in an informative earlier review of emergent constraints, Klein and Hall (2015),[v] which (unlike the Caldwell paper) is open-access.

Sherwood et al. summed two physically-based metrics, D and S, to form a lower-tropospheric mixing index (LTMI) and used that as their principal emergent constraint. Caldwell found that while Sherwood S is meant to operate through SW cloud feedback, in CMIP5 models it actually gains correlation almost entirely through other terms. They therefore assessed both Sherwood S and Sherwood LTMI as not being credible.

However, Caldwell assessed Sherwood D, which predicts tropical low cloud changes due to boundary layer (BL) drying by convection, as credible. Nevertheless, while Sherwood D is computed using data from the tropical Atlantic and East Pacific, Caldwell found that its correlation with cloud feedback there is smaller than in the West Pacific (see top LH panel of Figure 1). That might cast doubt on the credibility of D, since its physical mechanism was predicted to occur over cooler oceans where mid-level outflows of ascending air occur, rather than in warm tropical oceans such as the West Pacific where such outflows do not usually occur. [vi] Moreover, Brient et al. (2015) found that while the convective mixing strength mechanism proposed by Sherwood et al. occurs in all GCMs, it only controls the low cloud response in about half the CMIP5 models.

Zhao et al (2016)[vii] showed that when they varied the convective precipitation parameterization in the new GFDL AM4 model, Sherwood LTMI and D changed little, and non-monotonically, between their high, medium and low ECS model variants. They say “It is clear that the two low-sensitivity models (M and L) produce a larger increase in upward water flux near the top of the boundary layer (800–900 hPa) than the high-sensitivity model (H)”, which is the opposite of the fundamental physical mechanism posited in Sherwood et al., being “that an increase of upward transport of moisture near the top of the boundary layer over the convective regions should result in decrease of low clouds because of dehydration of the boundary layer”.

If one takes Sherwood D at face value, all CMIP3 models and all but two CMIP5 models (ACCESS1-3 and CSIRO-Mk3-6-0) are unsatisfactory, in that they are inconsistent with the reanalysis-based estimates of D. Alternatively, if the reanalysis values are contaminated by model biases and a majority of models are actually consistent with the true value of D, then the Sherwood D constraint would not rule out low sensitivity models. In addition to this problem, the Sherwood D constraint seems to lack robustness to changes in the ensemble of models. Caldwell noted that Kamae et al. (2016)[viii] found that Sherwood LTMI explained low cloud feedback but not ECS in a perturbed physics ensemble (PPE), suggesting a lack of robustness. Of direct relevance to Sherwood D, Kamae et al. find no clear relationship between D and ECS in their multiple model-variant PPE.[ix] Figure 2 compares the relationship between D and ECS found by Sherwood et al. with that found by Kamae et al. in two subsets of their 8-model variant PPE, being those model-variants with respectively old and new convection schemes (OldCnv and NewCnv).

While only two of the models that Sherwood studied (both with higher than average ECS) have D values that are consistent with the reanalysis-based values, three of Kamae’s model-variants have, for some parameter values, D values consistent with the reanalysis-derived values. These D-value consistent cases have widely varying ECS values, many of them being between 2.1°C and 3°C. Moreover, the sign of the relationship between D and ECS varies between the model variants, being positive for five and negative for three. If one were to add the Kamae data to Sherwood et al.’s data the implications for ECS of the Sherwood D constraint would be very different.

The doubt arising from the geographical source of much of the ECS correlation with the Sherwood D constraint arguably not being consistent with the proposed physical mechanism, the finding by Zhao et al. that that mechanism has the opposite effect on ECS across their three model-variants to that proposed in Sherwood et al., and the non-robustness of the correlation between the CMIP3/CMIP5 data and the Kamae data, all point to Sherwood D not actually being a credible emergent constraint. In any event, Sherwood D only explains 16% of the CMIP5 intermodel ECS variance, so it is a weak constraint.

Brient Shal is based on CMIP5 models with shallower tropical low clouds in weak-subsidence regimes tending to have a higher ECS. The paper’s authors did not view it as being about an emergent constraint, as they were fully aware of the limitations of climatological shallowness as an emergent constraint.(e.g., all models may misrepresent the relevant real-world dynamics in their parameterization schemes).[x] The point of the paper was that different models produce different low-cloud structures because of differences in the parameterizations; some of these differences in the present-day climatology correlate with the models’ response to warming. Brient et al. (2015) emphasised the importance of the competition between convective drying and turbulent moistening. They found that the climatological shallowness of low clouds was an indicator of the relative importance of parameterized convective and turbulent mixing in climate models, while the competition between these two mechanisms was a key determinant of the change in low cloud extent with surface warming and hence SW cloud feedback and ECS. These are interesting findings. However, the shallowness index has limited ability to discriminate between models with differing climate sensitivity. Brient et al. found that CMIP5 models that had shallowness indexes consistent with observational estimates had ECS values spanning almost the entire CMIP5 range. Brient Shal explains even less of the CMIP5 intermodel ECS variance than Sherwood D – only 14%. Moreover, its rather weak 0.38 correlation with ECS in CMIP5 models (it could not be tested on CMIP3 models) arises entirely from the inclusion of four models that fail Caldwell’s clear-sky linearity test. The correlation for the 17 models that pass that test is negligible – only 0.05. There is no contradiction between any of this and what Brient et al. say in their paper – they did not claim that the shallowness measure is useful as an emergent constraint.

.I will examine the other two constraints that Caldwell considered credible, Brient Alb and Zhai, and set out conclusions, in Part 3 of this article.

[i] An emergent constraint on ECS is a quantitative measure of an aspect of GCMs’ behaviour (a metric) that is well correlated with ECS values in an ensemble of GCMs and can be compared with observations, enabling the derivation of a narrower (constrained) range of GCM ECS values that correspond to GCMs whose metrics are statistically-consistent with the observations.

[iv] In Brient Shal the major contributors to the remaining correlation contribution of –0.23 are the residual error terms arising from model and equation non-linearity.

[vi] Against that, Sherwood et al. argue that it is not expected nor required for the feedbacks to be concentrated in the same regions the constraints are measured.

[ix] The Kamie study involved creating 8 model variants with noticeably different key parameterization and closure schemes that affect cloud and convective behaviour, and then undertaking a PPE investigation for each. As a result of including 8 permutations of these structural model aspects they sampled a far wider range of model behaviour than a single-model PPE, which involves varying key parameters in a model but not structural aspects of it.